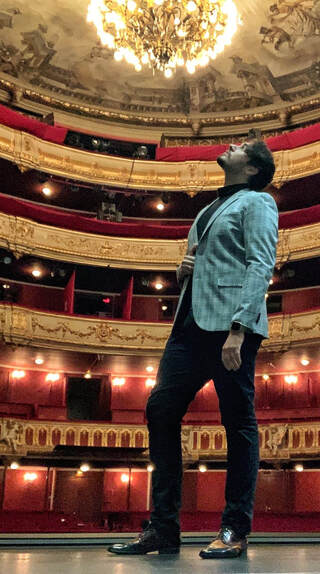 Néstor, on Strasbourg stage.
Born in Santa Cruz de Tenerife 28 years ago, Néstor Galván begins his studies of violoncello and singing at the Professional Conservatory of Music of Tenerife, where he graduates in June 2015 with the highest qualifications. He continues his training in vocal technique participating in master classes of artists such as Montserrat Caballé, Celso Albelo, Isabel Rey (Teatro de la Zarzuela in Madrid, 2017) and Piero Visconti (2018).

His professional career starts with operas such as Lucia di Lammermoor (Normanno) at the Teatro Guimerá in Tenerife, and La Bohème (Parpignol) and Werther (Brühlmann) with Celso Albelo, both at the Adam Martin Auditorium, also in Tenerife.

In 2017, Néstor Galván participates in the 'Family Opera' project, assuming three roles of Les contes d Hoffmann (Spalanzani, Pitichinaccio and Crespel), and a year later he is invited at the Tenerife opera season as a cover of the role of Arturo in Lucia di Lammermoor.

Talking about Spanish lyric genre, he performs roles such as Ricardo in La del manojo de rosas and Marín in Las de Caín, again, at the Teatro Guimerá.

Since 2020 he is part of the prestigious opera studio of the Opéra National du Rhin in Strasbourg, and throughout this season he collaborates in the productions of Samson et Dalila (first Philistine), Hänsen und Gretel (Witch) and in the operetta Friederike by Lehár.

He will soon also participate in Mozart's Requiem and in the opera Madame Chrysanthème by Messager, singing his first leading role.